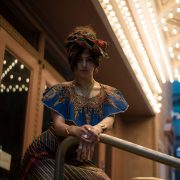 Lover of art in all forms, Claire Elizabeth Grace (CEG, pronounced sāj) is a 24 year old creative focused on love, equity, and remaining true to herself. She grew up in the right city of Rose’s and out of the concrete, continues to establish herself as an icon in the creative world. A passion for people, you have always been able to find CEG somewhere she can make a positive difference. In 2017, after spending time in so many places where you can look up and see people of color (unlike Portland, OR) she founded The Celebrating Women of Color Project which is a creative non-profit that seeks to find innovative ways to inspire, empower, and celebrate women of color. Later that same year, after performing in front of 3 thousand people at a Portland protest with a random young musician named Daniel (The .wav) who was recommended last second by Jonny Cool, CEG decided that music, modeling, and acting would again become her main career focus. About a year, 30 shows, and countless hours in the studio later, CEG + The .wav released their debut single together on her birthday June 28th 2018,  and are set to release her debut EP “Rose Woman” June 28th 2019. She is truly the CEG of All Trades…Master of some, is oftentimes better than master of one.