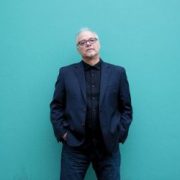 A well-respected veteran of the American blues scene, Curtis Salgado has been rocking audiences with his full-force vocals and powerful harmonica work since the late ’60s, and has performed with some of the biggest and most enduring acts in the genre. Salgado was born on February 4, 1954 in Everett, Washington. He grew up in a family of music lovers — his folks were fans of classic jazz and blues, from Kid Ory to Fats Waller, and his siblings were hip to soul shouters such as Wilson Pickett and blues masters like Muddy Waters. Seeing Count Basie when he was 13 first inspired Salgado to consider a career in music, and after hearing Little Walter for the first time, he began learning to play the harmonica, picking up some tips from an instruction book his mother gave him.

Briefcase Full of Blues By the time he was 16, Salgado was playing paying gigs, and only a few years later he and his band the Nighthawks (not to be confused with the long-running Washington, D.C. act of the same name) were a major draw on the Pacific Northwest club scene. In 1975, Salgado and a handful of other blues fans in Eugene, Oregon (which had become Salgado’s home) began booking a blues festival that gave Salgado and his bandmates the chance to share stages with (and often back up) a number of legendary musicians, including Willie Dixon, Sonny Terry & Brownie McGhee, Albert Collins, Big Walter Horton, and Otis Rush. In 1977, Salgado & the Nighthawks were playing a typically raucous gig in Eugene when he struck up a conversation between sets with an especially enthusiastic patron. The fan turned out to be actor and comedian John Belushi, who was in town shooting the film Animal House. Belushi, whose tastes at the time ran to metal and hard rock, struck up a friendship with Salgado, who turned Belushi into a blues fan, and much of Salgado’s suggested listening would form the set list for the Blues Brothers’ top-selling debut album, Briefcase Full of Blues.

Who’s Been Talkin’Salgado also became friends with up-and-coming guitarist and songwriter Robert Cray, who frequently played the Pacific Northwest at the time, and when Salgado’s Nighthawks began to splinter, he joined Cray’s band on harp and vocals. Salgado appeared on Cray’s debut album, 1980’s Who’s Been Talkin’, but left Cray’s band in 1982; between 1984 and 1986 he was a member of Roomful of Blues, and sat in on the sessions for RoB’s 1988 collaboration with Earl King, Glazed. Salgado then formed a new band, Curtis Salgado & the Stilettos, and after making the rounds of the Pacific Northwest club circuit, the group released its self-titled debut album in 1991. Steve Miller, a longtime fan and friend of Salgado’s, invited him to open Miller’s 1992 summer concert tour, and in 1994 Salgado took a sabbatical from his own band to sing with Santana for a U.S. tour. Salgado released a solo album in 1995, More Than You Can Chew, and a year later he and his band hit the road again with Steve Miller; Salgado also found time to release another album that year, Hit It ‘N Quit It. In 1999, Salgado signed a deal with the roots music label Shanachie Records, which released his Wiggle Outta This album the same year; Soul Activated would follow in 2001 and Strong Suspicion in 2004, as Salgado continued his busy touring schedule.

Clean Getaway In 2006, Salgado was diagnosed with liver cancer and underwent treatment that included a liver transplant; two years later, he was found to have lung cancer, but was declared cancer-free in time to release the album Clean Getaway in 2008. In the fall of 2011, Salgado signed with the powerhouse blues label Alligator Records, and his first album for Alligator, Soul Shot, appeared in February 2012. In July 2012, Salgado announced that another cancerous growth had been discovered on his lung, but after undergoing surgery, he and his doctors expected him to make a complete recovery. He did.

The Beautiful Lowdown In 2013, he won three Blues Music Awards: B.B. King Entertainer of the Year, Soul Blues Male Artist of the Year, and Soul Blues Album of the Year. While in recuperation, Salgado wrote songs in earnest. When he reentered the studio in 2015, he was armed with 17 originals. During the sessions, he pared the set back to 11 of his own tunes and Johnny Guitar Watson’s “Hook Me Up.” He also co-produced with Marlon McClain and Tony Braunagel, and wrote the horn charts. Beautiful Lowdown was released in April 2016. He then paired with guitarist/vocalist Alan Hager for 2018’s Rough Cut, which featured covers of songs by Elmore James, Muddy Waters, Son House, and more.