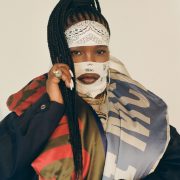 Brooklyn rapper Leikeli47 wears a signature ski mask to keep the focus on her infectious and sometimes experimentally raucous rhyme and production styles, which express her empowering, funny, sad, and thought-provoking experiences as a black woman on releases including 2018’s Acrylic.

Wash & Set Growing up shy, lonely, and bullied in Brooklyn, Leikeli47 knew she wanted to make music at an early age. Inspired by Lauryn Hill, Lil’ Kim, Wu-Tang and Jay-Z, she began creating songs in the early 2000s, using whatever she could to make beats (she once forged a rhythm by tapping on a microphone’s pop filter). She debuted with 2012’s self-produced mixtape LK-47 and followed it with 2013’s Flower Shop EP. By the time she delivered LK-47, Pt. 2 in 2014, she was opening for Skrillex and Diplo at Madison Square Garden. After signing to RCA, Leikeli47 released a self-titled EP on the label. Along with guesting on tracks by Baauer (“Day Ones”), AlunaGeorge (“Mean What I Mean”), and Pussy Riot (“Straight Outta Vagina”), in 2016 Jay-Z featured her single “Fuck the Summer Up” on a streaming playlist of the same name. Leikeli47’s music appeared multiple times on the soundtrack to HBO’s series Insecure in 2017, the same year she released her debut album for RCA, Wash & Set. The first album in a trilogy exploring beauty, empowerment, and identity, Leikeli followed it with 2018’s Acrylic, a harder-edged set of tracks featuring production by Clyde N Harry, Charlie Burrill, Mike Barney, and Gavin Williams.