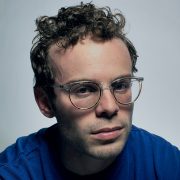 Acclaimed pop singer/producer Dan Vidmar, a.k.a. Shy Girls, will release a new album, Bird on the Wing, in Spring of 2019. The album contains a palpable sense of Vidmar’s evolution towards the carefree, a newfound buoyancy and optimism which pervades the whole effort. The album is an enticing and uplifting mixture of lo-fi soul, nerdy jam outs, minimalist grooves and a whole lot of chimes. It pulls from a far-reaching and unexpected array of influences, with elements of Jaco and Weather Report, dusty Dilla-esque drums, and noodling Garcia guitar solos.

The timeless warmth of Vidmar’s vocals are, as always, at the heart of things. Once again the album was self-produced by Vidmar at his home studio, and he also played and recorded the majority of its instrumentation, relying heavily this time around on a Casio CZ5000 and a fretless bass.

Yet this time the “bedroom pop” moniker might find a deeper meaning in the context of Bird on the Wing’ s lyrical content. On a standout track, “This Is Your World”, Vidmar sings: “I feel your presence in my bones, from my chest to my toes….this must be what they talk about”. Filled with the contentment and peace that a deep love brings, the love songs of Bird on the Wing seem crafted effortlessly, imbued with the intoxicating liveliness of romantic (even, domestic) bliss. It’s an album fit to soundtrack Fall drives with the top dropped, or dinner parties for 2 on the bedroom floor, alike – those moments where we feel the music of our world all around us. Bird on the Wing is rife with deeply intimate professions, coupled with grooves that feel nearly levitational. These are the sounds of a seasoned pop songwriter who has not only hit his stride, but found a new spring in his step to boot.

Shy Girls first came to attention in 2013 with his slow burning, sax-tinged “Under Attack,” followed by the release of his buzzed-about Timeshare EP, subsequent 4WZ mixtape and – most recently – the progressive and cinematic opus Salt, which was his full-length debut. Vidmar has collaborated with artists such as Cyril Hahn, Tei Shi, Rome Fortune, Junglepussy, and ODESZA, and has toured with HAIM, Little Dragon, and Maxwell.