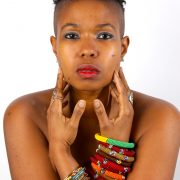 Jazz vocalist and DC-native Akua Allrich has proven herself to be a musician of extraordinary talent and crowd-moving passion. With finesse and charisma, this vocalist, composer and teacher, has successfully etched out a place for her unique musical expression, electrifying audiences in and around the nation’s capital with sold-out performances.

The launching of her freshman album, A Peace of Mine, and second album, Uniquely Standard, Akua Allrich Live! the young artist’s music and concerts created a significant buzz with critics and music-lovers alike. Said Franz Matzner of All About Jazz, “Akua Allrich’s music flows with a free, natural energy as engaging as her equally ingenuous personality.” Her appeal soon reached across US borders and attained international attention. In early 2011, Allrich signed a distribution deal with Japanese record label AGATE/Inpartmaint Inc.

With a stellar line up of musicians, Akua’s newest release Soul Singer, presents the artist in a whole new light, highlighting her talent for composition as well as her ability to merge different sounds & genres into one complete beautiful musical experience!

Allrich’s style is fluid and ever evolving. Her musical roots run deeply into blues, soul and rhythm and blues, with a clear grounding in jazz and pan-African music. She sings in many languages including Portuguese, French, Spanish, English, Xhosa, and Twi. Given her ability to capture the essence of a broad range of musical genres, Allrich is often likened to legendary artists such as Oscar Brown, Jr., Miriam Makeba, Bob Marley and Nina Simone. She has developed popular tribute programs involving the latter two women and other great African American women of jazz.

Akua Allrich was educated at Howard University, where she obtained her BM in jazz vocals and a master’s degree in social work. She was taught, coached and mentored by talented musicians such as world-renowned singer Kehembe V. Eichelberger, singer/drummer Grady Tate, and pianist Charles Covington.

She is the child of a musical family (her father, Agyei Akoto, was a founding member of the jazz group, Nation, and recorded two albums during Allrich’s youth). Her home held a wealth of cherished recordings that she and her siblings were invited to explore. In fact, she did not buy any albums until her second year in college because her parents had such an amazing collection of jazz records. One of the first jazz albums she bought was John Coltrane’s Live at the Village Vanguard: The Master Takes.

Allrich has established herself as a musical treasure with massive stage personality and vocal style that is fluid and ever evolving.  Offering an artistry that she aptly (and perhaps playfully) summarized as “Jazz+ Neo Afro-Soul- Blues-reggae- funk-rock- folk music,” she can carry a tune across these many genres with stunning authority.

Akua Allrich has already proven her abilities as a performer and bandleader by producing and performing many successful solo and group programs. In addition to focusing on her own engaging compositions, she keeps an ear to the rest of the world and to other eras and artists. Akua Allrich has inspired music lovers from all walks on an international scale, who enjoy her exceptional work and expect nothing short of brilliant artistry from each of her offerings.