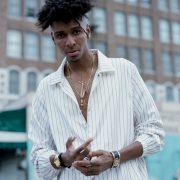 Songwriter/producer/multi-instrumentalist Masego blends genres such as trap, house, and jazz, creating an emotive future-R&B fusion. After years releasing singles and short efforts, he issued his official full-length debut, the sultry Lady Lady, in 2018.

Born Micah Davis in Kingston, Jamaica in 1993, he grew up in Newport News, Virginia with a ravenous appetite for music, teaching himself how to play cello, drums, piano, and guitar, and specializing in saxophone. He released songs online while finding his style, posting videos of live looping and on-the-spot beatmaking as well as tracks where he improvised saxophone over other artist’s beats. His 2016 release, The Pink Polo EP, was Masego’s most focused and organized outing to date and featured the single “Girls That Dance.” In 2017 he released “Tadow,” a collaborative single with French artist FKJ. The accompanying video for the song went viral, showing the two musicians impressively live-looping all of the track’s instruments in the studio. “Tadow” landed on his official full-length debut, Lady Lady, which was issued in September 2018.