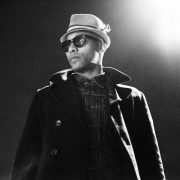 It’s been quite an evolution for this native New Yorker. From singing gospel music in his father’s Baptist church, to recording contemporary R&B and house music for Epic/550 and A&M Records, valuable experience was gained. Redray then toured the country as front man of the soulful rock-band “Mosaic” on the H.O.R.D.E. music festival. Through opening for Lenny Kravitz and Blues Traveler, to name a few, Redray gained notoriety. Soon thereafter, he joined former front man of “The Talking Heads”, David Byrne’s in his touring band from 2008-2010.

While Redray uses all of his influences, his songwriting draws comparisons from Ben Harper, Maxwell to The Black Keys. However, his smooth and smoky vocal quality along with his gospel approach set him apart. “I’ve always listened to various styles of music, everything from Curtis Mayfield to The Alabama Shakes. It doesn’t matter to me, as long as the music has heart.”

Redray made the journey from New York City to Portland, Oregon late in 2002. Leaving family and band-mates behind, Redray knew he had an opportunity to create something new. Inspired by his change of scenery, he began strumming an acoustic guitar documenting his experiences and emotions. “I embrace playing solo because I hadn’t done it prior to moving to Portland, I consider it a challenge”. You can experience Redray’s rootsy blend of soul singing over sparse guitar strumming at various Portland venues. Whether it’s with a full band or solo, Redray has the innate ability to stir up deep emotion within his audience. You can’t help but nod your head and sway in your seat as you listen to Redray’s heartfelt lyrics and organic vibe. Look out for Redray Frazier! You will be glad you did.