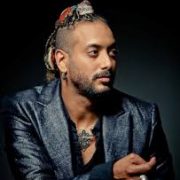 Each member comes from a different background and brings their own sound and arrangements to Ravid’s compositions. The result of this amazing group is a powerful energy that mixes Yemenite, West African, Latin & Jazz influences and what Ravid likes to call “New Culture Music”. The mambo and North African rhythms create a joyful and deep foundation, while the vocals remind the listener of ancient Arabic chants mixed with funk & blues. For their first album, the group collaborated with the well-known maestro Omer Avital who served as a musical director & producer. Since then, Yemen Blues keeps magic alive with a constant stream of new songs and their world-renowned exciting live performances!!