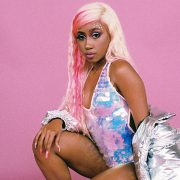 Similarly, Yung Baby Tate flaunts a rainbow-worthy variety of vibrant talents as an entertainer: namely singer, producer, rapper, dancer, actress, and “dope ass chick,” she laughs. However, with her colorful aesthetic musically and stylistically, she lives up to all of the above—especially, “dope ass chick.”

“I feel like I’m a rainbow,” she affirms. “No human being is just one thing. We’re all dynamic. Some days, you feel red, pink, or blue.”

Music also seemed predestined. Tate actually attended the 1996 GRAMMY® Awards in the womb of her mother Dionne Farris. As a kid in Decatur, GA, she developed a passion for nineties R&B and hip-hop, citing Brandy, SWV, Missy Elliott and more as influences in addition to pop muse Gwen Stefani.

Sharpening a style of her own, the budding songstress made her introduction with 2015’s ROYGBIV and then the 2017 breakout single “Bob,” clocking nearly a half-million cumulative streams within six months. 2018 saw her drop the Cuddy Buddy EP, BOYS EP and Summer Lover EP as she prepped her next project GIRLS, writing and producing herself once more.

In the end, this rainbow is about to shine brighter than ever in 2018 and beyond.

“We all share the same frequency on this earth,” she leaves off. “It’s important for me to promote positive messages and let people feel like this music is therapy. Even the crazy songs might help someone. I love that.”